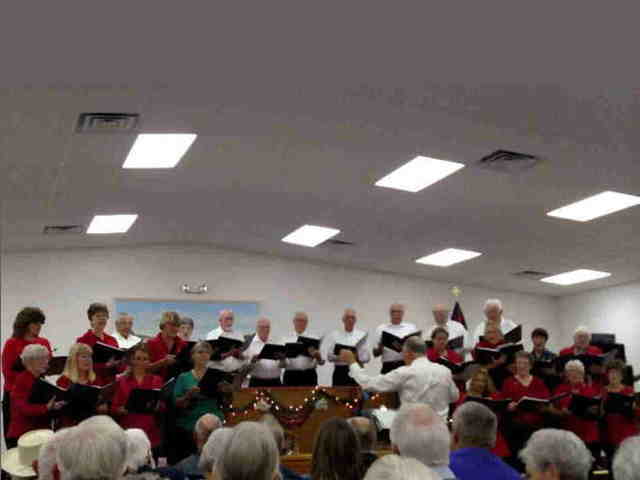 Editor’s Note: The Christian Service Center now has its own website at: csc.rvhobo.net

The Christian Center has a long history here on the desert. Over 40 years ago this ministry began through the work of Jim and Katie Fish. Most of that history is well documented.

Music has always been a strong part of worship at CSC (Christian Service Center) and, in fact, choirs were active until the late 80s. In the mid 90s, Sally and Gordon Hunt were singing in the YPG (Yuma Proving Ground) chapel choir and occasionally visiting CSC.

In 2005 they became a part of the Center and almost immediately a choir sprang to life. At first, the ensemble could be called an octet rather than a full choir. But soon enthusiasm for singing took hold and rehearsals are now held twice a week (on Tuesdays and Thursdays at 6PM).

It wasn’t long before the special Christmas concert and singalong became a staple of the music year. Now the choir works hard at presenting a musical cantata that outlines the Christmas story in words and music.

As in years past, the choir will offer a daytime concert, with refreshments to follow, and a night time cantata, with finger food following.

This year’s 2015 cantata can be heard Friday, Dec. 18 at 2PM and the following night Saturday, Dec. 19 at 6PM. Come join us for a wonderful Christmas musical experience!