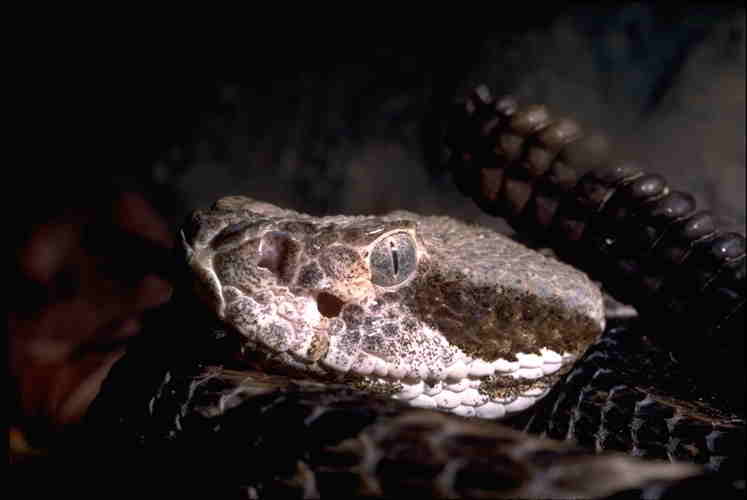 Everyone is fascinated by rattlesnakes. The fascination is most often caused by fear that they are aggressive and deadly. Most rattlesnakes avoid contact with humans. They tend to avoid wide open spaces that offer little protection from predators and usually spend their time in and under low-growing shrubs, natural and artificial debris and rocks. They are most active in the warmer times of the year—spring through early fall—and many of them are nocturnal during the summer months. When favorable temperatures occur, many rattlesnakes are even active during the winter months. You are most likely to see them when the air temperature is between 70° and 90°F (21° to 32°C), regardless of the time of day—be it June or January.

Rattlesnakes may be among nature’s best examples of efficiency and economy of motion. The use of venom to capture prey conserves energy that would otherwise be needed to capture and kill an animal. Rattlesnakes have very long, curved fangs that lie parallel to the jaw line when not in use. When rattlesnakes strike, the fangs are rotated by muscular contraction to an erect position, somewhat perpendicular to the jaw line. The fangs are hollow, which allows the snake to inject venom through the tooth into its victim. Each fang is connected to a venom gland (located toward the back of the head on the upper side) by a venom duct. Baby rattlesnakes (born live from midsummer to early autumn) arrive fully equipped with teeth and venom. The venom functions to help the snakes feed, it is not believed to be a defensive weapon. Approximately 20 percent of defensive strikes are “dry;” that is, no venom is injected. This has led to the common belief that rattlesnakes can “choose” not to use venom although it is unknown why rattlesnakes elect to control venom injection.

Snake venoms are extremely complex; there is no “standard” rattlesnake venom. They consist of combinations of proteins that range from hemotoxins, which break down cells and tissues, to anticoagulants and neurotoxins that may cause circulatory arrest or respiratory paralysis.

To locate their prey rattlesnakes have heatsensing pits which are located behind each nostril. These pits can detect differences in temperature even several yards away and larger, non-prey animals such as humans give off larger heat images, signaling the snakes to avoid these encounters.

Often observed flicking its tongue, snakes use their forked tongue to smell the air. Snakes are ectotherms, meaning they must regulate their body temperature externally by sunning themselves or retreating to cool, shaded areas

The best way to distinguish rattlesnakes from other kinds of snakes is by the rattle. From birth rattlesnakes have the first segment of a rattle, which is called a prebutton. The prebutton is lost the first time the snake sheds its skin and is replaced by a button. Each shedding episode that follows adds another segment to the rattle, and rattlesnakes shed their skin three to six times per year. But only when there is more than one segment can the rattle produce sound. There isn’t anything inside the rattle; the various segments merely bump against each other to produce the sound. The tremendous amount of sound produced results from movement of the rattle back and forth 60 or more times per second.

Some interesting facts about snakes are that they are found throughout the world except Antarctica, Iceland, Ireland, Greenland and New Zealand and a recently discovered fossil snake was 49 feet long, longer than a school bus!