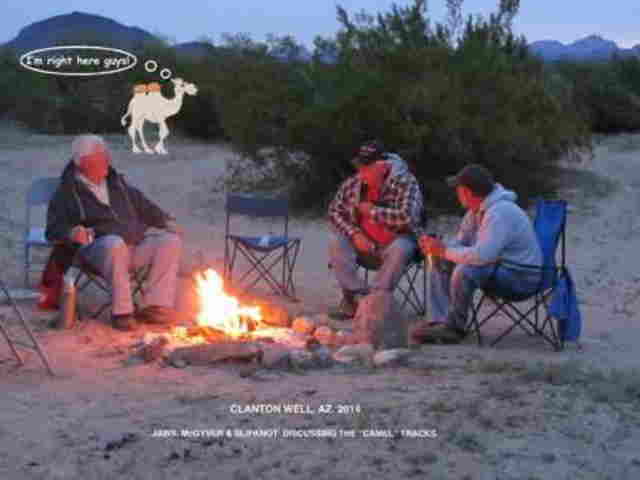 Last season a group of us went out through the KOFA heading to Camp Hyder on a jeep expedition. The group consisted of Jaws and Lil Abner in Jaw’s red jeep, McGyver and SlipKnot in McGyver’s red Geo Tracker and Northwind and DesertRain with Ringo in our green jeep.

After a night at the HooDoo Hilton we went east to Clanton Well. We took a slightly different route out of the KOFA, which was fine except for a couple of problems with Macgyver’s vehicle. He broke an air shock line and the shock spring resulting in a real roller coaster ride for the last several miles. We all had a good laugh watching Macgyver and Slipknot bouncing along the road, even getting air borne on a few occasions. 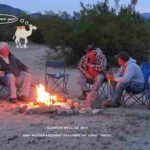 We arrived at Clanton Well and Jaws gave us all a history lesson on the site and its previous owners. We were wandering about on foot when we came upon some unusual tracks in the sand and some rather odd shaped/size ‘droppings’. At this point Jaws related that the tracks and stuff were, according to his prized sources, from camels. The army started training with a herd of camels for use on the front lines in North Africa during WW2, but the war ended before the animals were ever placed into service. The story goes that the camels were released or escaped out into the Arizona desert.

The story has since taken on a new life and now we are preparing for another trip out to find these elusive camels and settle the discussion once and for all, well maybe. This time we are going out a few days ahead to set up a game camera to capture images of whatever is leaving the unusual tracks in the sand. Then a 3 day, 2 night trip is planned to recover the camera and the elusive camel images.

So now you all know how this great “camel hunt” came to be. Sounds nutty, but hey, nobody said we are all sane out here in the heat!