Every December people on the desert enjoy a light parade. People decorate their cars with lights and drive around the LTVA. The first time we saw the parade of lights was in December of 1997.  We were impressed that out here in  the desert something so beautiful could make it feel more like Christmas and we owe it all to one man: Peanuts (Mortimer Ross)  and also to his wife Nutcracker (Lucille Ross) who went with him on the parade.

The light parade was started in 1980 by Peanuts (Mortimer Ross). The first year Peanuts, dressed in a Santa suit, stood on the corner below Quail Hill where Senator Wash Road and Ferguson Road meet and handed out candy canes.  Not sure when Peanuts, dressed as Santa, started driving around the desert on a little scooter giving out candy canes. Later on Peanuts advanced to a small car and traveled around the LTVA giving out candy canes. At one point in time Nutcracker (Lucille Ross), Peanuts’ wife drove a half ton truck with Peanuts in the back. That was how the parade got started. As the years went by Peanuts started to decorate his vehicle with lights. He would always dress in a Santa suit and give out candy canes to children that were visiting their grand parents on the desert. In years that followed more people decorated their vehicles and followed Peanuts and Nutcracker through the desert spreading Christmas cheer. As Peanuts got older it was harder for him to lead the parade at night so he got someone else to lead it and he would be second in line. The last year Peanuts was in the Parade was 2005. It was the longest parade ever, there were 16 cars all decorated for Christmas. It was a spectacular light show. Although Peanuts & Nutcracker are no longer with us, we will keep the light parade going and always remember that he started something that brings the Christmas spirit to us all, when we are far away from our home and family.

For the past few years, Pistol Pete has been heading up the parade, but with his death this summer, we have no one to organize things.  If this is something you would like to do, then please let the desert community know on the CB channel 12, or you can email the Boondocker Chatter at newsletterforsenatorwash@gmail.com. and the editor will let other people know.  The parade usually ran for 5 days from Dec. 20-25. 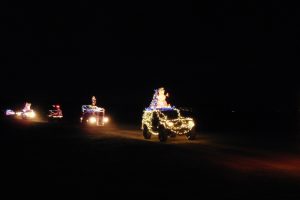